WHAT'S THE POINT'? - the question every maths teacher dreads.

After the success of 2014's Year 9/10 shows we returned with even more shows in summer 2015. Be reassured that most of the content was different to the 2014 shows &#40but hopefully teacher's brought different students anyway). And it was just as interactive and entertaining.

With Matt Parker as host, each show had two parts. In the first part, there were a series of short, interactive cameos showing different ways in which maths is used in the real world. In the second part, we were joined by a special guest speaker who has applied maths in their profession.

The guests were as follows:

LIVERPOOL 25th June - Dr Mark Lewney, rock guitarist and winner of the first ever FameLab contest, who uses maths to check out new inventions in the world of telecommunications. BOTH SHOWS SOLD OUT

BIRMINGHAM 26th June - Paul Shepherd, architectural engineer, who has worked on numerous famous stadiums around the world including the O2 Arena, Arsenal's Emirates Stadium, and the new Lansdowne Road rugby stadium in Dublin.

LONDON BLOOMSBURY 29th June - Neil Riley, visual effects supervisor at Passion Pictures, who is in charge of the computer animations of Aleksandr the meerkat from CompareTheMeerkat.com Neil will be joined by Aleks LIVE at this show, which promises to be a unique experience.

GREENWICH THEATRE 1st July - Roma Agrawal, the multi award winning engineer who is most famous as the engineer responsible for the top section of London's Shard. MORNING SHOW SOLD OUT

We want schools to encourage attendance from students who don't necessarily like maths much but show an aptitude for it.

Tickets for these events were £6.25+VAT. 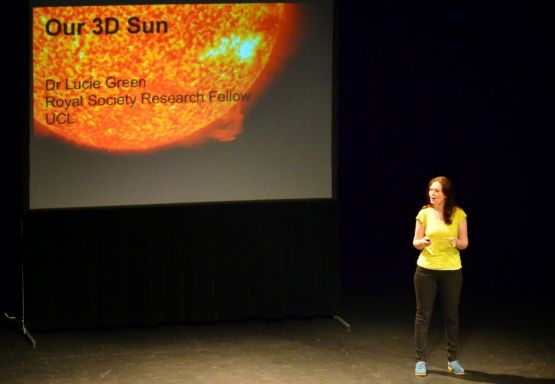 "This had more motivational impact on my students than anything I've seen in 30 years of teaching. A fantastic afternoon - thank you!"
- Visitor Comment