Rob Eastaway has been Director of Maths Inspiration since it began in 2004. He is an author whose books on everyday maths include the bestselling Why Do Buses Come In Threes? and Maths On the Back of an Envelope. He is the puzzle adviser for New Scientist magazine, and often appears on BBC Radio 4 and 5 Live to talk about the maths of everyday life.

Matt Parker is known as the "stand-up mathematician" and is the only person to hold the prestigious title of London Mathematical Society Popular Lecturer while simultaneously having a sold-out comedy show at the Edinburgh Festival Fringe. Matt is always keen to mix his two passions of mathematics and stand-up as well as presenting TV and radio shows. In 2019 his second book, Humble Pi, became the first ever maths book to be No.1 in The Sunday Times bestsellers (just ahead of Michelle Obama's autobiography).

Ben Sparks is a mathematician, a musician, and a speaker. He gives talks and workshops around the world on the beauty and magic of mathematics , and often performs songs with his guitar as part of the show. He's based at the University of Bath and also works with the Advanced Maths Support Programme around the UK. He's a big fan of imaginary numbers and Geogebra, and if his face is familiar, you might have seen him on YouTube's Numberphile channel.

David Acheson is a Fellow of Jesus College, Oxford, and the author of 1089 and All That. He enjoyed his 15 minutes of fame when he appeared live on BBC's Tomorrow's World to demonstrate his explanation of the Indian Rope Trick. And he plays a mean guitar, too.

Sammie Buzzard studied maths at the University of Exeter - and then discovered she could use it to help us understand the impact of climate change on our planet. She now uses maths in her research into the polar regions at University College London. She fills her spare time playing the oboe, making science themed cakes and supporting Barnet FC which is possibly even more depressing than melting ice shelves...

Nira Chamberlain is a professional mathematician who has used maths to solve problems in aerospace, retail and the car industry. He is the next President of the Institute of Maths and its Applications. Nira grew up in Birmingham, has a PhD in Mathematics from Portsmouth University, and calls himself "Aston Villa's number one armchair fan".  In the 2018-19 football season, Nira combined his two passions when he used maths to correctly predict that Aston Villa and West Bromwich Albion would meet in the play-off semi-finals.

Hilary Costello graduated with a degree in Mechanical Engineering in 2010 from the University of Alberta, Canada. She did a PhD at Cambridge, looking at whether it might be feasible to cool the planet by putting particles into the stratosphere to reflect sunlight (How cool is that?!). In May 2011 she starred in Channel 4's documentary recreating the WW2 Dambusters raid. Now she's working on top secret aviation projects - and she's also learning to be a glider pilot.

Tom Crawford - is a maths tutor at the University of Oxford with a mission to share his love of maths with the world through his award-winning website tomrocksmaths.com. Whether he's performing live as the 'Naked Mathematician' with Equations Stripped, telling you the fun facts about numbers you didn't realise you've secretly always wanted to know with his Funbers series on the BBC, or getting another maths tattoo (8 and counting), it's safe to say Tom is always finding new ways to misbehave with numbers.

Kyle D Evans is a singer, comedian and general jack of all mathematical trades.  He has talked &#40and sung) at venues from science festivals to comedy clubs, schools to pie shops.  He is a regular contributor to BBC Radio 4's flagship numbers programme More or Less, and is perhaps most proud of having a song about the Riemann hypothesis used as a local radio jingle - surely a world first.

Hannah Fry is a lecturer in the Mathematics of Cities at the Centre for Advanced Spatial Analysis at University College London. Her PhD was in the mathematics of fluid flows but she now spends her days looking at the patterns in human behaviour. She's shot to fame as a presenter of numerous BBC programmes, including Cities In The Sky and Horizon.  In 2019 she delivered the highly acclaimed Royal Institution Christmas Lectures on TV.

Zoe Griffiths is a mathematician and who travels the UK and internationally giving talks and workshops in schools, at science festivals, teacher conferences and at comedy nights. Zoe has given talks at the Cheltenham Science Festival, in the Royal Institution world-famous lecture theatre and has performed mathematical comedy at Robin Ince’s variety show Nine Lessons and Carols for Curious People.

Dr James Grime is a speaker and maths populariser with the Millennium Mathematics Project at Cambridge Unviersity. He has toured the world with his code-breaking talk. In his spare time, James creates videos about maths for Youtube - where he has become something of a maths celebrity. And how did he get into this business? He came to Maths Inspiration in Manchester as a PhD student.  The rest is history.

Timandra Harkness performs science comedy variously with Matt Parker, Helen Pilcher and solo. She also presents radio programmes on BBC Radio 4, and her book Big Data: Does Size Matter? is published by Bloomsbury in Summer 2016. Timandra is studying Maths and Statistics with the Open University just for fun.

Aoife Hunt works for Movement Strategies, a consultancy that specialises in analysing the movements of people.  At work, she uses maths and statistics to figure out the patterns of large crowds at high profile venues like Wembley Stadium. Since finishing her PhD in evacuation modelling at the University of Greenwich, Aoife has worked with researchers across the world to figure out how we can use maths to make buildings safer.

Hugh Hunt grew up in Melbourne, Australia, and is a Reader in Engineering at Cambridge University. He has the prestigious Rooke Award for public promotion of engineering. Hugh is famous for his documentaries on Channel 4, including Dambusters - Building the Bouncing Bomb, and Attack of the Zeppelins. His research is in Climate Engineering - how to cool the planet if we fail to meet our CO2 emission targets.

Andrew Jeffrey is an author, professional magician, and former teacher who thinks maths is pretty cool. He spends his time either training teachers, doing magic to help explain some aspects of maths, or performing magic shows which contain an unnecessarily high proportion of mathematics. He is fluent in almost two languages.

Steve Mould is a comedian and a science communicator, with a Masters Degree in Physics from Oxford. He has been the science expert for Blue Peter and was the Street Scientist on BBC One's Britain's Brightest. Alongside Matt Parker and Helen Arney, he formed Festival of the Spoken Nerd, a hit show that has toured London, Edinburgh and New York. His Youtube channel has had over 12 million views.

Yolanda Ohene is a physicist at University College London where she researches new techniques to image the brain. Yolanda enjoys communicating science at science festivals, school talks and comedy nights. She has featured on the BBC Tomorrow's World Live, given talks at Cheltenham Science festival and spoken in assemblies across schools in London. Yolanda grew up in Derbyshire, and if she's not talking science, you’ll find her dancing somewhere... anywhere!

Helen Pilcher is the only Lithuanian, Elvis-obsessed scientist/journalist/comedian in the world. Helen writes for the science magazine Nature. She is also one half of the Comedy Research Project, a stand-up comedy duo who spent long hours deriving the mathematical formula for the perfect joke - and so has no excuse not to be funny.

John Roberts is a director at Jacobs, one of the UK's largest engineering firms. He is one of the UK's leading theme park engineers, with projects including the London Eye and the "Big One" at Blackpool Pleasure Beach, and he is chief engineer for the spectacular new i360 ride in Brighton. He's been a consultant to several TV shows, including Top Gear. He is also a visiting professor of Engineering Design at Manchester University.

Jennifer Rogers studied Mathematics with Statistics at Lancaster University before going to the University of Warwick to do her PhD. She is now Head of Statistical Research at PHASTAR, who provide statistical consultancy on clinical trials (in other words, they answer the questions: "is this new pharmaceutical drug safe?", and "does it work?"). Jen can regularly be found chatting all things statistics on radio and television, most recently on BBC One's Watchdog Live presenting their "Best or Worst" segment.

Paul Shepherd - After taking a Maths degree at Cambridge and a PhD in his home city of Sheffield, Paul joined engineering consultants Buro Happold, where he worked on the design of many high profile buildings including Arsenal's Emirates, Dublin's Lansdowne Road and even the London Olympics stadium (if only for half a day). He is now a Lecturer at the University of Bath.

Katie Steckles is a mathematician based in Manchester, and a member of Matt Parker's Think-Maths team. Since gaining her PhD she has travelled the country to talk about maths in schools, at science festivals, on BBC radio, at music festivals and on the world famous Numberphile channel. She enjoys doing puzzles, solving the Rubik's cube and baking things shaped like maths.

Colin Wright graduated in Pure Mathematics at Monash University, Melbourne, before going on to get a PhD at Cambridge. While there he learned how to fire-breathe, unicycle and juggle. These days he is director of a company that specialises in software for marine radar, but takes out time to give juggling talks all over the world. 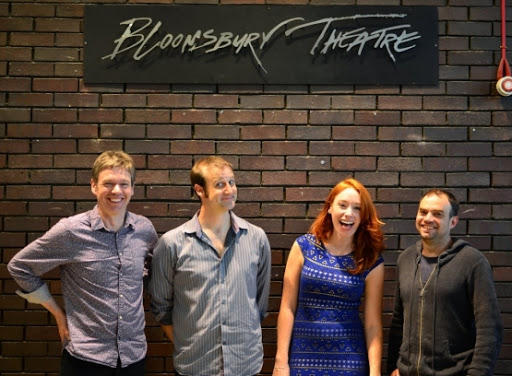 "Showed that mathematicians can be entertaining and maths is fun "
- TEACHER 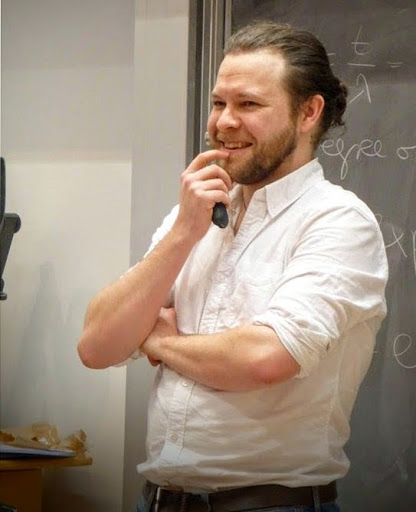