MUCH ADO ABOUT NUMBERS

The links between Maths and Shakespeare

This is a unique interactive lecture show, part of Maths Week England, ideal as a combined GCSE trip for Maths and English Departments, but your Year 12s will enjoy it too.

Rob Eastaway is a speaker and author whose books on everyday maths include the bestselling Why Do Buses Come In Threes? and Maths On the Back of an Envelope. He's given maths talks at venues ranging from the Royal Institution to Pentonville Prison*. Like everyone, he studied Shakespeare at school, in his case Richard III ("A horse! A horse! My kingdom for a horse!").  Years later, when Richard III's skeleton was found buried under a car park, Rob wrote an article about the probability of being one of the king's descendants. That article was used to help make the case for interring Richard's remains in Leicester rather than York.

Rebecca MacMillan is an improviser with Impromptu Shakespeare, who tour the UK and head to the Edinburgh Fringe each year, making up brand new comedic plays in the style of Shakespeare. She also teaches Shakespeare improvisation, and has presented in academic settings such as the British Shakespeare Association's Annual Conference.  Rebecca studied Latin & Ancient History at Leeds University, but she hasn't lost touch with her maths skills. She's dealt with the book-keeping of two theatre companies for a number of years, and was on the supervisory committee of a credit union for a while too.

Back to Event Listing

Waiting for map to load... 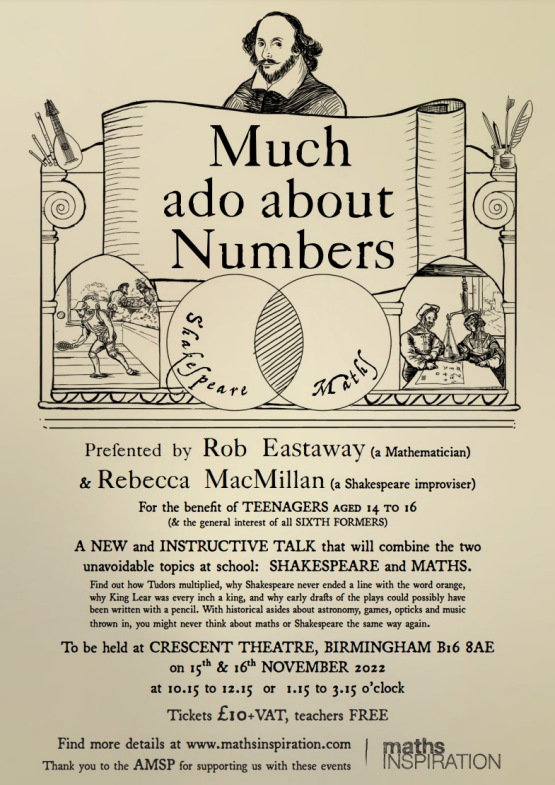